Posted on April 7, 2013 By historicitywasalreadytaken

January 11, 2019: This post represents a combined version of my previous posts on this subject, and was cross-posted to Beyond Victoriana. Further, I wrote this post before completing my MA thesis on the topic. You may read that here: “An Uncertain Life In Another World”: German and Austrian Jewish Refugee Life in Shanghai, 1938- 1950.

German Jews did not immediately begin to put their emigration papers in order after Hitler came into power, or after the passing of the Nuremberg Laws. As far as they were concerned, they were fully assimilated Goethe reading, WWI fighting German citizens. They could not believe, and would not believe, that the country they loved would turn against them.

Hitler introduced his anti-Jewish legislation slowly over the course of the 1930s, giving German Jewry time to rationalize each new piece; this especially held true for Jewish men, as they tended to work in traditionally Jewish occupations. Jewish women, on the other hand, through their regular contact with gentiles allowed to them through their place in the domestic sphere, became aware of the “social death” being imposed on them by Nazi legislation long before their husbands took notice.

In the wake of the mass arrests of Jewish men during Kristallnacht, it fell to these women to free their husbands, typically from Dachau. Nazi officials would not release men until their families provided proof that they would depart from Germany immediately upon their release. Thus, not only did women have to rescue their husbands, but they also had to navigate the emigration process by themselves. Due to the complex legal frameworks enacted by possible destination countries to keep Jewish refugees out, it was immensely difficult for Jews to secure visas out of Germany, made even more difficult when they were confronted with the massive exit tax forced on emigrating Jews.

There was, however, one destination which had not put up legal roadblocks to fleeing Jews: Shanghai; this had more to do with the decentralized and highly colonized nature of Shanghai than with any sort of altruism.

While the Chinese government had the right to demand to see emigration papers before new arrivals would be allowed to enter Shanghai, this was seldom enforced. Thus, to get to Shanghai, all fleeing families needed were boat tickets. For this reason—in accordance with the necessity to present proof of emigration to Nazi officials before male family members would be released—Shanghai became the only option available to some of the families of incarcerated men.

The journey to Shanghai began by train to an Italian port. From these ports, refugees boarded luxury liners serviced by German and sometimes Japanese crews, sailed across the Mediterranean, through the Suez Canal, into the Indian Ocean, and around to the east coast of China. Their ship then made its way down the Whangpoo River until it docked at the Bund, Shanghai’s harbor-side financial district. This route was in use through Italy’s entrance into the war on June 10, 1940—although a few ships full of refugees did depart from Portugal and Marseilles before the Mediterranean was fully closed to passenger traffic. After the Mediterranean route closed, Jewish refugees fled to Shanghai via the trans-Siberian Railroad. This overland route took them across Russia, through Siberia, and into North China, where they boarded a ship for Shanghai. The overland route was in use until December 7, 1941. After that date, all escape routes to Shanghai were closed.

Though I’ve focused on German and Austrian Jews, about 1,800 Polish-Lithuanian Jewish refugees—including a large population of yeshiva students—too found refuge in Shanghai. This population of yeshiva students and their families first fled to Vilna, and then to Kovno, Lithuania after the German invasion of Poland. The Dutch and Japanese consuls in Kovno collaborated to grant the refugees visas to the Dutch Caribbean holding of Curacao; the trip to Curacao involved a stopover in Kobe, Japan. Both consuls were aware of the fact that it was not possible to cross the Atlantic during a time of open warfare, meaning that they illegally granted the refugees admittance into Japan.

This group of refugees remained in Kobe until 1941, at which point the Japanese government sent them to Shanghai. The Dutch consul, Jan Zwartendijk, was later fired in disgrace, while the Japanese consul, Chiune Sugihara was merely asked to step down. Sugihara saved 10,000 Jews total and is listed by Yad Vashem as one of the Righteous Among the Nations; it is probable that his actions were merely in line with general Japanese policy towards the Jews, which will be expounded upon below.

The first wave of refugees to arrive at the Bund in 1938 disembarked with little more to their names than the clothes on their backs, a suitcase or two, and the equivalent of about fifteen American dollars; Nazi policy forbade them to take much else out of the country. This poverty could be seen in each subsequent boat full of refugees. The visible poverty of these Jews embarrassed the established Russian and Sephardic Jewish communities of Shanghai; the Sephardic Jewish community was Baghdadi in origin, and had traveled to Shanghai as businessmen under the auspices of the British Empire, while the Russian Jewish community arrived in Shanghai in two main waves: first fleeing from the pogroms of 1905, and then from the violently anti-Semitic White Russian forces during the Russian Civil War.

One year before the refugees began to arrive, hostilities of the Sino-Japanese War were waged in the streets of the Hongkew district of Shanghai, leading to its partial destruction. Because land and property in Hongkew were thus so inexpensive, and because of the destitution of the new arrivals, Jewish relief organizations in Allied and neutral countries along with the Sephardic and Russian communities in Shanghai—the Hardoon and Kadoorie families in particular—collaborated to set up refugee homes based in Hongkew for the refugees. These homes (Heime), though obviously better than nothing, were crowded, unsanitary, and the time spent there was extremely distressing for the formerly upper middle class refugees.

While some refugees received money from relations in Allied or neutral countries, had smuggled money and/or valuables out of Germany, or had been able to quickly find gainful employment and relocate to the French or International Districts of Shanghai,  many were never able to accumulate the funds needed to secure housing outside of Hongkew. Some, so traumatized by Kristallnacht, leaving Germany, arriving with nothing to the Heime, and their loss of identity, became depressed and never left their Heim; this was especially true for those who had held high status professions in Germany. 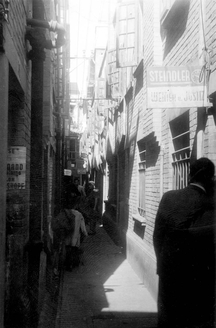 Shanghai, China, 1944, An alley in the Jewish ghetto. Courtesy of the Yad Vashem Photo Archive.

Some refugees were able to establish a fairly normal life in Shanghai, complete with jobs, refugee schools founded by Horace Kadoorie, and synagogue attendance. However, in February 1943, the Japanese rulers of Shanghai announced that all “Stateless Persons” who had arrived in Shanghai after 1937 had to relocate to Hongkew—an area of about one half mile in length already populated by thousands impoverished Chinese refugees—by May 1943. This proclamation was directed at Jewish refugees as an attempt on the part of the Japanese to appease their German allies. The “designated area” to which the refugees were relegated is, and was, colloquially known as the “Shanghai Ghetto.”

Conditions within Hongkew were deplorable, with the available housing insufficient to shield the residents from the extreme temperatures reached in the summer and winter months, lack of access to adequate health care, a contaminated water supply, a barely sufficient sewage system, trash-lined streets, and targeted Allied bombing raids.

The refugees also had to contend with poverty, malnutrition, and health problems associated with a contaminated water supply. This said, refugee children were still able to attend school, adults could secure passes out of Hongkew to go to work, and the refugees were so vigorous in shaping their surroundings that, by 1944, the main thoroughfare of Hongkew looked more like a street in Vienna than a bombed out section of Shanghai. In fact, the refugees created such a rich cultural life in Hongkew that, when some groups of refugees began to stage theatrical productions, other refugees penned editorials in refugee-run periodicals complaining about the quality of said productions.

Men and women at a Shanghai bar. Courtesy of the Yad Vashem Photo Archive.

Despite having forced the Jewish refugee population to relocate to Hongkew, the Japanese took no directly aggressive or violent steps against this population despite the urging of their German allies. There are two reasons for this, both based in Jewish and Japanese isolation from each other throughout most of their respective histories. The first, is that the Japanese formed a positive view of the Jewish people after private Jewish American financier Jacob Schiff funded their efforts in the Russo-Japanese War (1904-1905). Though positive, this view characterized the Jews as a wealthy, powerful people. Not long after, Japan fought alongside the White Russians in the Russian Civil War. The White Russians circulated the Protocols of the Elders of Zion among the Japanese troops, and when this document reached the Japanese government, that body saw it as a confirmation of their prior characterization of the Jews. The Japanese then enacted a policy of appeasing these people with such control over the Western governments, thus refraining from abusing the Jewish refugees in their care.

American troops occupied Shanghai in the immediate aftermath of Japan’s 1945 surrender. After a year or so of peace, the refugees once again found themselves in a precarious political position. The economy was failing under the rule of Nationalist leader Chiang Kai-Shek, and every day they received news of the progress made by Mao Zedong’s Communist forces. By 1949, the year in which Mao Zedong established the People’s Republic of China, most of the Jewish residents of Shanghai—Polish, German, Austrian, Russian, and Baghdadi alike—had fled to the United States, Australia, or Israel. By 1956, 171 Jews were left in Shanghai.

A total of about 20,000 Jews (estimates vary) sought refuge in Shanghai. Others—though very few—made it to safety in such locales as the United States, Argentina, and Palestine. Many of the Jews who had fled Germany in the early 1930’s for other European nations ended up trapped in the late 1930’s, early 1940’s as those nations were invaded and occupied by the Nazis. Of the German Jews who escaped from Germany before 1941, only half of them survived the Holocaust.

← Malintzin and the Subaltern
The Jewish Enlightenment: A Brief Overview →